Nothing Left to Chance

Everything came together for Ichis My Choice and Grant Setnicka during the Derby Open finals at the Breeder’s Invitational. 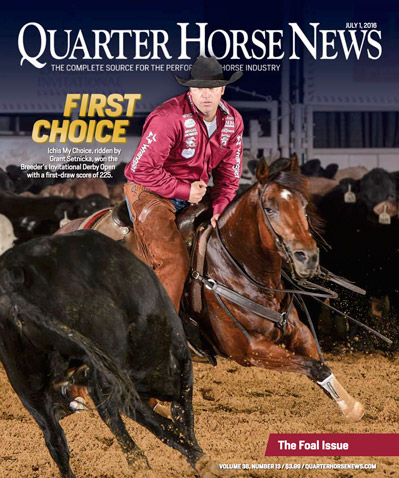 As the first draw in the 27-horse finals, Setnicka, an Equi-Stat Elite $1 Million Rider, knew he would need to leave it all out in the pen to earn marks that would hold. He walked Ichis My Choice to the herd with intention and threw down a smoking run that scored a 225. While a few other combinations came close, Ichis My Choice and Setnicka’s score out of the gate was the eventual winner. The Championship was worth a hefty $58,766 paycheck, which pushed the mare’s lifetime Equi-Stat record to more than $175,000.

“I knew I had to have a really, really good run being first,” Setnicka said. “I wasn’t crazy about my draw, but I felt like I was lucky because I think the first set of cattle was a little bit better than the second set. I wasn’t leaving anything to chance. The first few moves, she just felt a little wild and reactive. Once I got a chance to really start using her, I think she settled in. Luckily, I cut some cows that really let her run and stop.

“Then I got to just sit there and bite my nails for the next three hours. Any one of those horses could have won it. Any way I looked at it though, I had a good check and agood run, so I was happy.”

Ichis My Choice’s owner, Constance Jaeggi, of J Five Horse Ranch LLC, also competed on the mare in the Derby Non-Pro finals, but it didn’t slow her down a bit.

“She had a lot of runs,” Setnicka said. “I didn’t really know how it was going to affect her, but it didn’t seem to affect her at all. Everything just really came together for us. I want to thank Matt Miller, T.J. Good, Lloyd Cox, and Constance and Chubby [Turner] for giving me an opportunity to ride this horse.”

Jaeggi was thrilled that her mare, who was picked for purchase by Turner, finally got her time in the spotlight.

“It has been a huge honor. After we bought her we sent her to Grant, and he has just done a phenomenal job with her. She has been in all of the finals, and we couldn’t ask for a better program for her to be in,” Jaeggi said of Ichis My Choice, who was also an Open finalist at the NCHA Futurity and Arbuckle Mountain Futurity, and was the Derby Open Co-Reserve Champion at The Cattlemen’s, in addition to her NCHA Super Stakes Reserve finish. “This is so big for us, and it is really exciting. She really deserved a first place, and I wanted her to get that reccgnition. We are proud of her and proud of Grant. I trust him with that horse. It turned out great.”